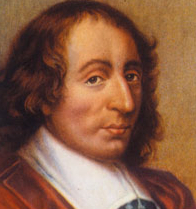 Stated simply: Whether you believe in God or not, you’re either right or wrong. Pascal’s Wager analyzes both the benefits of being correct and the consequences of being wrong about the existence of God.

Believers have little to lose if they are wrong about God, because they will simply die and be gone. But for the scoffing unbeliever to be wrong about God is unthinkably tragic. There is much to lose by one’s unbelief, according to Pascal.

In short: If you don’t believe in God, you’d better be right. Because if you are wrong there will quite literally be hell to pay.

Now, I don’t know how Blaise Pascal felt about women in church leadership, but let’s apply his thinking to the Egalitarian/ Complementarian debate. What is at stake?

To an Egalitarian, gender has nothing to do with whether a person is suited for church leadership, but rather that determination is made based on a person’s giftings. An Egalitarian is just as likely to appoint a woman to  Senior Pastor as they would be to appoint a man to that position if they believe she is the more gifted of the two.

Complementarians, on the other hand,  believe that gender is crucial to the mission. They believe that God has assigned specific roles for each gender to follow, and given gifts that correspond to their assigned roles.  A Complementarian would never appoint a woman as Senior Pastor, because they believe God has not equipped women for that role.

So in Pascal’s way of thinking, what are the risks that result from error these two positions?

I really don’t desire to trivialize disobedience, but the fact is, if Egalitarians are making a mistake, it tends to be an honest one. So it’s not really a matter of disobedience at all, but one of error, if in fact Egalitarians are wrong. And from my perspective, I don’t see grave consequences in the error.  Yes- some men may lose leadership, pastoral, or teaching positions, but one would assume that these would be the men who demonstrate a lack of giftedness in those areas.

If Complementarians are wrong, there will be people that could have been leaders, pastors, and teachers, people who had giftings and /or a calling on their life to be these things, but who were limited, prevented, or barred from reaching their God-given potential. And if that’s the case, let’s just call it what it is: The work of the devil.

Of course, no Complementarian that I know would willingly participate in the devil’s work. The point of their strong stand for proper “gender roles” in the church (and the home) is obedience to God and the Bible. I believe they mean well.

But it is the particular work of the devil to oppose leadership in the church. It is his work to discourage leaders, to raise up opposition to their ministry, to place limits on what they can accomplish for the Lord, and if at all possible to stop them from ever becoming leaders in the first place. That is exactly what Complementarian theology does to women who aspire to be leaders in the church.

In short: If you believe in Complementarian theology, you’d better be right.

One thought on “Pascal’s Wager on Women in Ministry Leadership”